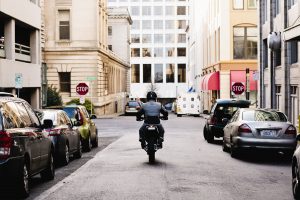 Earlier this month, House Bill 1157 was recently introduced to the Washington State Legislature for consideration. Sponsored by Rep. Drew MacEwen (R-Union), the bill would establish the Lane Sharing for Safety Act. This would allow Washington motorcycle riders to overtake and pass in the same lane occupied by the vehicle being passed, also known as lane splitting.

If HB 1157 passes, motorcyclists in the state of Washington would be able to split lanes when traffic is traveling 35 mph and up to 10 mph over traffic. The intent is to relieve traffic congestion and provide safer highway conditions for riders.

Congested traffic is one of the most dangerous situations for motorcyclists. With the stop-and-go vehicles and potentially distracted drivers, riders have a higher risk of getting in a serious accident while on busy roadways, freeways or highways. Among the most common type of vehicle accidents are rear-end collisions, which make up 40 percent of all accidents on the road. Even a minor read-end collision for a motorcyclist can lead to disastrous outcomes.

But is lane splitting safe?

The American Motorcyclist Association formally endorses responsible lane splitting. Currently, California is the only state where lane splitting is legal. While it may not be common here in the states, the practice of lane splitting is used around the world, especially in Europe and Asia.

There is much debate on both sides of the issue. Many non-motorcyclists may perceive lane splitting as being a dangerous practice. Motorists often say that it is difficult to spot lane-splitters who speed between cars, increasing the risk of accidents. Some might feel like lane splitting is unfair as it allows motorcyclists to cut ahead of traffic.

On the other hand, many riders often strong feel that lane-splitting is a safer alternative to sitting in traffic. A 2015 study by UC Berkeley’s Safe Transportation Research and Education Center found that motorcyclists who split lanes in heavy traffic were less likely to be struck from behind by other motorists and were less likely to receive head or torso injuries.

The research also found that lane-splitting motorcyclists were generally safer, as they were more likely to use better helmets, travel at slower speeds and were less likely to have been using alcohol or carrying a passenger. Lane splitting provides a benefit for other drivers too. With less motorcyclists on the road, this can reduce congestion and carb emissions.

If HB 1157 passes, it will take Washington motorists some time to adapt and get used to the new lane splitting law. Our lawmakers must implement major public education campaigns to teach all motorcyclists and motorists about the new rules of the road. There will also need to be significant training effort to educate the law enforcement community and officials to safely implement the new law.

What are your thoughts on lane splitting? Send us a message and let us know if you think we should allow lane splitting in Washington.