Earlier this February, a road rage incident involving a motorcyclist ended in tragedy on I-5 in Milton, WA. 60-year-old Bruce Jones was shot and killed by a female motorcyclist during a road rage confrontation. While the exact cause of the road rage is under investigation, our sincerest thoughts go out to all involved in this tragedy.

With all the road construction and traffic going on in the South Sound, road rage can be a common reaction among many Washington motorists. Our team at Evergreen Motorcycle Attorneys have seen the aftermath of road rage far too often. We want to help ensure that drivers and motorcyclists alike stay calm and safe out on the road to prevent tragedies like this one from occurring in the future. 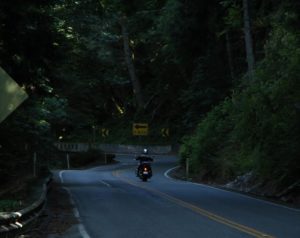 What is Road Rage?

According to the AAA Foundation for Traffic Safety, nearly 80 percent of drivers reported that they have expressed significant anger or road rage behind the wheel at least once a year. Road rage is one of the leading causes for accidents. Road rage is aggressive or violent behavior at the actions of another motorist.

Road rage behaviors include but not limited to:

Statistically, male drivers between the ages of 19-39 are significantly more likely to engage in aggressive behavior behind the wheel. They are three times more likely to get out of their vehicle to confront another driver in comparison to female drivers.

Oftentimes, road rage is the result of emotional distress. Highly-charged emotional situations, such as getting fired, arguing with your spouse, or rushing because you’re late for work, are examples of outside factors that can attribute to road rage.

Protect Yourself from Road Rage in Tacoma and Seattle

While road rage can be a simple as flipping someone the bird, it can also have dangerous and fatal consequences. According to The Trace, a nonprofit news organization focused on gun violence, the number of road rage cases involving firearms have more than doubled over the past three years — to 620 in 2016 compared to 247 in 2014.

While nobody wants to be a victim of road rage-involved accident, it can happen to anyone. When it comes to road rage, de-escalating is the best strategy. Avoid eye contact. Don’t make gestures or respond to provoke the other motorist. It’s always best to assume that it’s not personal. In most cases, the other motorist is just having a really bad day. If the situation further escalates, call 911. However, be sure that you’re in a safe place to do so.

Above all, be wary of the others on the road and drive safely. On a motorcycle, you are more likely to get severely hurt in an accident— so avoiding road rage situations is critical.

At some point in time, we’ve all experienced road rage. Whether you were the offender or on the receiving end — it can happen to anyone. However, no situation on the roadway should ever escalate into violence.

If you or a loved one were injured in a motorcycle accident due to road rage, give Evergreen Motorcycle Attorneys a call at 253-472-6000. We’ve helped countless people seek restitution from injuries on the road. Schedule an appointment today and one of our Tacoma motorcycle attorneys will make sure that you get the justice that you deserve.